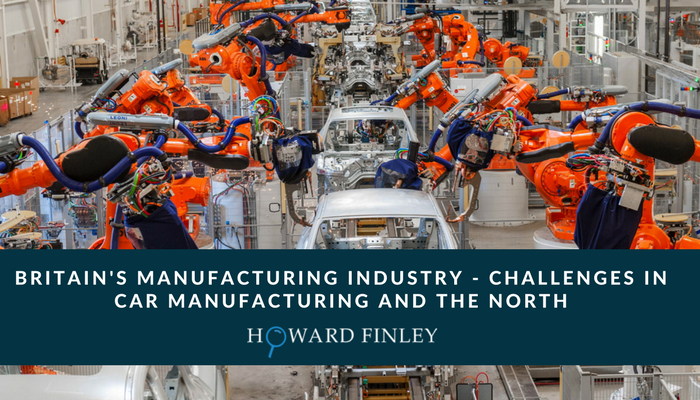 Britain’s Manufacturing Industry – New figures have shown that car manufacturing in the UK has dropped for the eighth month in a row, with the latest statistics being gathered for March. The shrinkage has been driven by lowering demand at home and ongoing economic uncertainty across Britain’s broader industry.

In the UK, car production came in at 147,471 units, which was a 17.7pc drop (measured by new units destined to go to UK markets), compared to the previous year’s figure.

At the same time, demand for exports also decreased by 11.9pc, which was a significantly higher drop than the 0.8pc drop noted for February. In this instance, demand had dropped across a number of markets.

Britain’s Manufacturing Industry Consequently, output for Q1 of this year has fallen by 6.3pc when compared to 2017. 440,256 cars came off British production lines last year and around 80pc of these headed to overseas markets. For the first three months of this year, exports dropped by 4pc year on year. This was far less pronounced than the 14.1pc drop in demand from UK markets, however.

The Society of Motor Manufacturers and Traders (SMMT) spoke on the matter, with Mike Hawes, the CEO, saying that the ongoing drop in output was of real concern. He also flagged up the linked importance of clarifying trading relationships after Brexit, in order to bring more certainty back to British manufacturers. This, he added, was particularly key given that Britain’s auto industry had dropped its output more than any other European nation after the EU referendum vote.

He explained that a top priority for the industry was the ability to continue to enjoy free and open trade without barriers and friction, saying that this had been key to earlier success and would be an essential driver for Britain’s ongoing growth.

Jaguar Land Rover has already confirmed that up to 1,000 agency staff will not be seeing their contracts renewed, due to falling demand in their new car markets. Other factors that have led to output drops include the recent bad weather. Having said that, the decline in UK industry isn’t expected to see a bvounce back at any time in the near future.

The SMMT calculates that Britain’s car industry is responsible for 10pc of UK GDP and that component and vehicle manufacturers deliver 13pc of the UK’s overall export volumes.

Businesses in manufacturing and services have said that Brexit is an ongoing concern for them and that they lack confidence about their profitability growth and turnover for the coming year. 25pc of members said that they have also changed their business model after the referendum result. 76pc of businesses said that they felt under pressure to increase staff wages to retain good staff.